The View From Brooklyn by Dhanya Rajagopal, Design Trust for Public Space 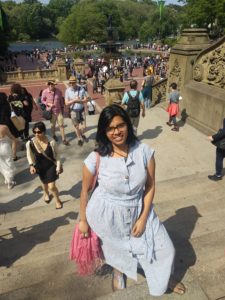 Here is my reflection before and during the quarantine for 10 days in Brooklyn, New York .

From the last week of February I started working from home. The week before, I was walking outside my office in Tribeca, and a man sneezed without closing his face, and a couple of mothers walking with their children to pick them up from a Gym, walked past and glared at him.

The second week of March my friend from India, who was here for a music performance visited me, and I had to show him around since his shows got cancelled. The typical tourist areas like the Wall Street, Brooklyn Bridge, Time Square still had a few people taking pictures. I was more concerned about going in the subway and being in crowded place than he was (because I live with roommates in a Brooklyn Brownstone).The WTC memorial fountain had a chain around it to prevent people from touching the surface. My friend said to me..”I feel like compared to what people described to me, something is missing in the city.” Things were surely different, but I still wanted to show him a few places that was always buzzing with energy. By now it was around 6pm, I took him to WashingtonSquare Park next and Union Square..because he’s a musician..and there is always some music in these parks. It was the least number of people I have ever seen in Washington Square..A lot of skateboarders took advantage of the emptiness in the fountains and the rest of the park. There was the pianist who always brings his grand piano to the park and asks people to feel the music by sleeping underneath it..he was there today as well…and to my surprise they were keeping their distance but still enjoying the music..he even used purell on the bed below the piano before people slept on it. The musician still got 4 people to sleep under the piano…he said to the crowd “this virus will not be a reason for us to be fearful of people and places we love. This music will remind you of all the beauty and loneliness some of us have felt the past few days.” He then started to play “Moonlight Sonata”.

That week, was also the last  time I rode the subway. Everyone around me in the subway seemed cautious, without making it too evident. There were a few who were wiping the steel rods with an anti-bacterial wipe before holding onto it, and there were more people who had masks and gloves, and some who didn’t sit next to empty seats near an elderly person.

The next week, I went out only to the Bodega to buy groceries..The community garden opposite to my apartment, which was empty all along now had 5 volunteers tending to the plants. It was bright and sunny. The Bodegas were still crowded and that made me a little paranoid. I got yelled at by a stranger because I was wearing a mask. He kept telling me ” Don’t you know, masks don;t work? Look at me, you think I am going to give you Coronovirus?” It took me aback..That was the first time I felt wary of what I did in my neighborhood.

It dawned on me that we were all just truly trying to live a normal life. The people in my neighborhood still walked their dogs, jogged, spoke with their neighbors and went to the Bodega and barbershop, sometimes wearing gloves and masks and 6 ft apart, but sometimes not really. I stopped wearing a mask outside my neighborhood, stopped walking away from my people on the sidewalk..because it felt like I was feeding the paranoia, while trying to be mindful of the social distance.

It’s been a week now since I left my apartment for anything except for a short walk and the cabin fever is slowly setting in. Luckily I have a rooftop that is open. It’s ironic that the things that I love about the city—the public transit, the accidental interactions, the intimate shopping experience of a Bodega and the people in parks, are all acting against this epidemic. I guess all of us feel this in some way. However, in the meantime, while people in my building are working from home, I also hear more music, loud singing in the day time and loud laughter and jumping noises from the roof above our apartment…This has further cemented my belief that, people need people, and places need people to enliven them.