In the notoriously alienating, majority refugee city of Amman, Jordan, the arts have long served as a point of refuge. Through artistic institutions, artists built forms of welcoming community that they could not find in the wider city. These uniquely inclusive spaces were sometimes described as “bubbles” by artists and outsiders alike. However, over recent years, transformations in Amman’s creative sector have raised the political profile of the arts. The combined and interrelated impacts of growing international investment in the arts, the emergence of a popular “artistic neighborhood,” and municipal investment in spectacular art and design festivals aimed to position Amman on the global stage, have moved Amman’s art scene into a position of substantial political and artistic influence. Politicians and planners for instance, now sometimes refer to Amman’s growing artistic neighborhood as an image of the city’s liberal, cosmopolitan future. In this paper, I explore how visions of alternative community are projected outwards through the mutual development of emerging artistic practice and the social construction of Amman’s urban space, such that artists are able to stake a claim on the future of Amman. How does artistic spectacle become a site where the city is reimagined? Who is included or excluded from this spectacle? And how does that transform everyday life in Amman?

Colin McLaughlin-Alcock is the Oden Postdoctoral Fellow for Innovation in the Liberal Arts in the Department of Sociology and Anthropology at Carleton College. He received his PhD in Anthropology from the University of California, Irvine in 2019. His research traces the intersections between emergent political activism, creative sector development, and urban change, particularly gentrification, in contemporary Amman, Jordan. Colin’s published work has appeared in City and Society, Visual Anthropology Review, and an edited volume.

Register in advance for this meeting:
https://us02web.zoom.us/meeting/register/tZIucuChqjMoHdQ53SVqDY_3H2qNsWsinyjO

After registering, you will receive a confirmation email containing information about joining the meeting. 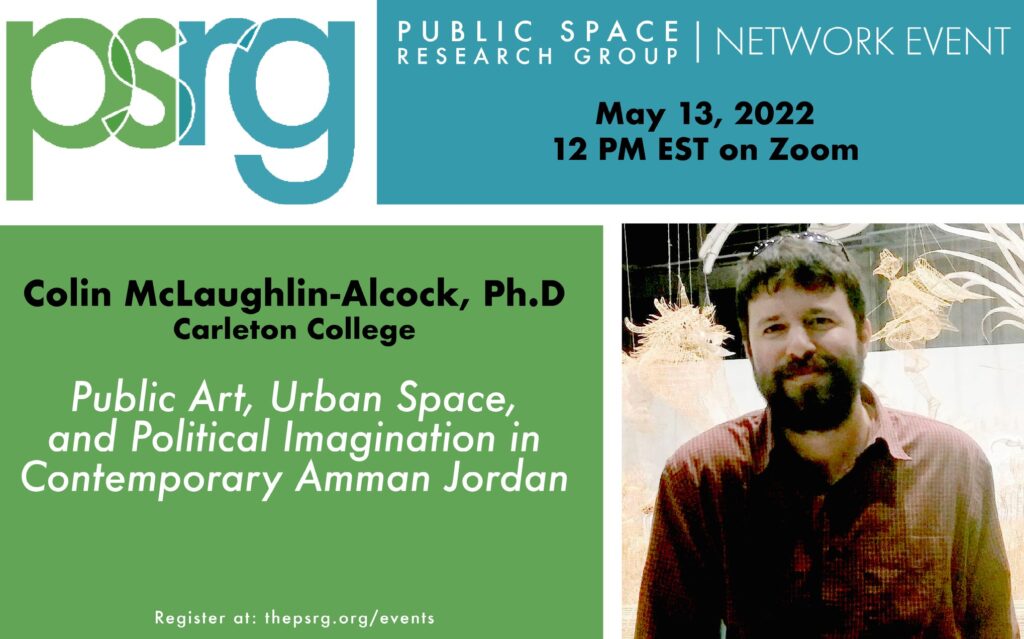