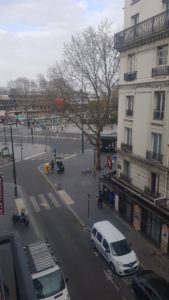 We have now been confined for two weeks in our apartment, fortunately big enough for us four not to get on each others nerves too much. The kids are enjoying the break from classes as the teachers are not pilling it too much on them. Still they have some online lessons and homework to submit. And they cannot see their friends save online. Minecraft is having a second life. Christina has been teleworking and has attended so many online meetings on Zoom that she can’t take them anymore. Meeting are meetings, online or not, and we can only take so many. I have been working on a report on collective composting in the Paris suburbs. Our team is split up all over France just at the time when we need to be together. Of course, everything is slower than usual.
Outside, the streets of Paris are much quieter than usual. The most notable consequence for me, besides that I cannot go out, is the absence of cars, save for a few buses, delivery vans and police cars. This makes for a much more silent city. Air quality also has dramatically improved, we have been told. Our neighborhood,  the porte de Clignancourt, north of Montmartre, is rather working class with many immigrants from the first, second and third generation. It is one of the densest in the city. As a result, pedestrians can still be found on the street. Many of them are homeless or poorly housed men who just wander. Others are bike delivery boys who are still working, in fact working more than ever. With many people staying in, deliveries are booming. Only food stores, post offices and tabacs are still open. Even parks are closed.

Cashiers have complained that they don’t have adequate protection, such as masks and antibacterial gel. But they are still at their post and people are still shopping for food. Most supermarkets apply some social distancing measures, such as limiting the number of patrons allowed inside and organizing lines outside. The government has announced that the minimal safe distance between people is one meter (a little over a yard). At our supermarket across the street, there are no such measures. Inside, people are still very close. But patrons try to stay apart as much as possible, which is not easy in crowded aisles encumbered with crates of goods that an overwhelmed and reduced staff hasn’t had time to shelve.
Everyday at 8 pm, people go to their window or  balcony  and applaud the heroes of the  day: nurses, doctors, ambulance drivers, of course, but also cashiers, sanitation workers, deliverymen, water and gas workers and all those whose work is deemed indispensable to the functioning of society.

Incidentally, this is where there seems to be a large political agreement and disagreement between most of the population and our government. Unions are pointing at the fact that all these workers who are being praised today are the same ones who had been striking for  months before the outbreak to defend their salary, their work conditions, and the public service they provide to the nation. They were also disparaged by the government and victim of police violence, even doctors. Today everybody agrees that nurses and doctors are heroes in need of better recognition. But there is still disagreement around what is an essential job. The government is pushing construction workers to keep showing up at their site. It is trying to protect the economy, when others are saying they are not protecting the workers against the virus and confusing priorities.

The government announced yesterday that we will be confined for two more weeks at the least. We suspect it will be even longer. The numbers of sick people reaching emergency rooms is higher than ever. How do we know how long? Our ability to go back out into the streets without restrictions, to travel and to go wherever we need and please, is predicated upon a serious drop in the number of cases of infection. For the numbers to go down we have to stay closed in. Let’s hope that people will behave, but also that masks, tests and ventilators will finally arrive in sufficient numbers, and let’s hope that our already strained hospital system will hold. Confinement is only one aspect of the struggle against the disease. Public space is suspended as a risk to society, but I am not sure how long we can suspend it for, without losing our collective reason. Also, when this is over, we need public spaces to discuss and assess the crisis, and hopefully, revise our collective priorities for the future.