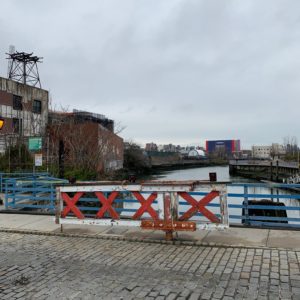 I’ve been waiting to experience an “ah ha!” moment before sending in any observation to the Group. Unfortunately, maybe fortunately, the kinds of “ah ha” moments I’m thinking about are more commonly generated (for me, at least) by embodied interactions with others, within social spaces where the mind may charge in a context, rather than inside a vacuum. That’s not to say that we’re outside of context, inside our homes. Quite the opposite. And I do want to begin this nervous missive by saying that some of my fears about ebbing desires for physical public space in our rapidly virtualizing world have been quelled by what I have been seeing in Brooklyn, NY. That’s good news, because I was growing more despondent about the rising insularity of New Yorkers buried inside their cellphone apps on the MTA–something fewer and fewer of us get to see everyday, unless we belong to that class of courageous workers who serve on the front lines of a pandemic we can barely understand at this early stage in its epidemiological arc.

So, today, I’m giving myself a break and sending the Group what I got: call them personal and political free associations on public life in a COVID-19 time. I hope this makes sense to some of you. If it doesn’t, I hope I’ll get a do-over. It does appear that we are in this for the long haul, so maybe I will…

My immediate reflections on the grammar of public space near the Gowanus (where I am writing this jumble) go something like this: New Yorkers do want real public space, or at least they want the freedom to move about and assemble as they please. It seems more apparent now and I think that may explain some of the behavioral defiance I’ve recently witnessed on commercial streets in Downtown Brooklyn and around the perimeters of city parks, where publics were huddling up with little (perhaps too little) care last Friday. Many or most us were listening to our leaders, however, the glorious weather teased us with with the portents of spring and people came out in droves after being warned not to do so. Perhaps that’s what inspired the Nw York City Parks Department to lock up the tennis courts inside Fort Greene Park, mirroring what the Department did a day or two earlier, when it removed hoops and nets on public basketball courts throughout the City.

These actions taken by government and the daily admonition to stay home being made by public officials reflect a temporarily right-sized demand for order or, at least, concession on behalf of a form of urban communality that is different from anything I have ever experienced as a native New Yorker of 54 years. Unlike the ones we heard after 9/11 or Superstorm Sandy, the charge today is to stay home, stay isolated if you want to help your neighbors. It’s the best way to support each other, physically, politicians on the right and left now agree. Buy your goods and take your exercise quickly and be done with it. From a public health perspective, it’s the only way ensure our safety and that of our neighbors. Yet I hope that the people now out on commercial errands will want to defend their rights to just be in public when the COVID-19 arc flattens–even if they pause to make sure we are out of the proverbial woods before they do. I want them to and I want them to trust that their instincts are valid in a democratic society. I abhor the idea that shopping will become the only form of public activity in times to come–something Rem Koolhaas once opined about, seemingly in perturbation.

For the moment, we appear to be growing more sophisticated in leaning toward virtual public space as the healthiest substitute for embodiment. I know I am and it’s frustrating, even if I can agree that it’s safer for everyone I know and don’t know. When on my errands, I am also pleased to see a lot less texting in the streets–street texting, or “strexting,” as I enjoy calling it when I complain to my students and friends. And I think the inventiveness I see among DJs who rally thousands to their virtual dance parties is exceptional, as is the ingenuity of my yoga teachers, who bring dozens together to sun salute from the safety of their living rooms. The work of colleges and universities in transiting curricula to online platforms so students can complete their academic year and graduate in many cases is nothing to shake a stick at either.

Nevertheless, I do have some preemptive misgivings about the following–especially as we draw closer to the November elections. For example, will policy makers like President Trump continue to take subtle and not so subtle digs at urban life? The President recently toyed with the idea of a quarantine around New York and its surrounding environs, to prevent the spread of a virus he largely refused to acknowledge a few short weeks ago. Similarly, will the corona virus be mischaracterized as an urban virus, a sickness incubated by the metropolitan density that enlightened architects and social observers such as the late Michael Sorkin believe may save our environment? Will cities become convenient political targets that too many electors around the nation want them to be when votes are casted and counted in that College this fall? Will the American political economy be unduly affected by antipathy toward urban centers and inhabitants after the 2020 Census is completed, seats are apportioned in the US Congress, and public resources are allocated for infrastructure projects and basic human resources. Prior to November, what will happen to the large scale public protests we normally associate with national political conventions every four years. Will they survive intact this summer and fall? Will political actions surrounding the presidential contest or the impending tumult that will disproportionately affect people on the economic margins find new forms of expression in a public sphere that will increasingly trend virtual as the human health crisis continues?

Built with WordPress | Protected by Akismet | Powered by CUNY