Public Life on the Streets of Oakland – The View from E. 19th Street by Gordon Douglas 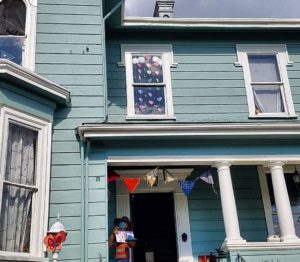 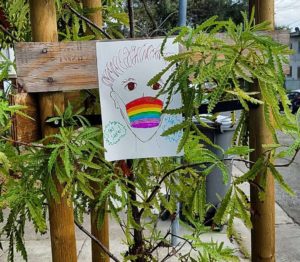 Every day for nearly a month now, looking out onto East 19th Street from my desk at the front window of my house in Oakland’s Clinton neighborhood, I have been unceasingly surprised by the number of people walking by. Although it is the very opposite of the terrifying circumstances that many are encountering (including so many dear friends and former neighbors that I fear for back in New York), I have to say that this may be the single most dramatic change to social life and public space in my community resulting from the “shelter in place” orders given across the Bay Area on March 16th.

The sudden uptick in pedestrian life is so noticeable because my block is generally a quiet one – often I could sit here and not see more than one person an hour during normal business hours. But it is hardly a unique phenomenon. I can attest it is certainly the case as far as us intrepid urban ramblers are now walking: throughout the many small neighborhoods cobbled together up and down the lower hills southeast of Lake Merritt to form the Eastlake and San Antonio districts.  Mainly residential but just across the Lake from Downtown Oakland, the area is definitely “urban,” especially by Western American standards:  a mix of low- and mid-rise apartment buildings, duplexes, and old single-family homes, punctuated by corner stores, laundromats, and the occasional strip of neighborhood businesses; it’s well served by buses and at most a half-hour’s walk to BART or to the larger commercial districts nearby. But most people still have cars, and pedestrian life on residential streets like mine is typically limited to morning and evening dog walkers, parents accompanying scootering children on an after-school outing, and only the occasional person who seems to be really passing through for any other reason. So the regular stream of passersby that I see now, including so many people I do not recognize, feels like a veritable parade on E. 19th Street.

The explanation, of course, is that we now have a huge number of previously unseen local denizens, perhaps many of the otherwise long-commuting and midnight-oil-burning variety, who are now either working remotely or have lost their jobs in the waves of layoffs, and are now free to go for more strolls. Indeed, seeing who is now walking past is making me rethink my understanding of the neighborhood’s demographics! Plus, many of the more everyday walkers are taking more and longer excursions throughout the day too: they too are likely home from work, kids are home from school, and most other activities are likewise canceled. And EVERYONE is looking for an excuse to get out into the spring weather to work off some stress away from the news-feeds, social media extremism, and increasingly unavoidable screen time. So why not take advantage of the encouragement that we’ve received to be outside for exercise and mental health? (Just today, Oakland announced the closure of fully 10 percent of city streets to cars – some 74 miles – to make more room for bicycles and pedestrians, perhaps ushering in a months’ long ciclovia throughout town.)

A related benefit to public life is that the front porches, windows, stoops, gardens, and sidewalks are filled with inspiring signs of social interaction. While wearing masks and keeping the prescribed 6 feet of “social distance,” friends and neighbors carry on all manner of contact across what Jan Gehl calls the soft edges between public and private space. For one thing, of course, we stop to talk when our walks occasion chance encounters. But we are also more intentionally making social calls for a conversation up the front steps or to allow children to wave at each other.  On E. 19thStreet, my partner recently instigated a “rainbow scavenger hunt” in which every household drew, painted, hung, or yarn-bombed rainbows onto the street side of their homes so that families could take walks to look for them. Another neighbor has called for “Friday Social Solidarity Porch Parties,” in which everyone heads out front at 5pm along with a beverage of choice and their favorite music on the stereo! I have heard that all of these things are happening throughout Oakland and beyond.

So, this is an unexpected upside for public life in the time of quarantine. It seems to me a rather inspiring sign of how people in my community are taking the physical distancing and shelter at home restrictions seriously while also finding ways to maintain social contact and a sense of community in place.

That said, these observations do come from a perspective of considerable and innumerable points of privilege. And, while the neighborhood is hardly a fancy one, these observations mainly describe those with the health, ability, and economic security to take long walks through pleasant streets in the midst of a pandemic, afflicted perhaps only by seasonal allergies, and with the ability to return home whenever they wish. I am mindful that just another short walk away from my window is a very different sort of public space, impacted by this pandemic in very different ways.

One cannot talk about public space in California without mention of homelessness. The staggering increase in tents, RVs, and entire encampments of informal structures populated by our unhoused community members has been one of the most visible changes to the urban landscape in the last decade, perhaps especially in East Oakland. Located along train tracks, bicycle trails, service roads, freeway off-ramps and underpasses, and a variety of other pieces of publicly owned land, these are public spaces too, if also places that people live. And we know that these curbside communities include many people in the highest risk groups for COVID-19, who also have no luxury of a safe place to shelter indoors.

Oakland’s largest informal settlements, several of which are located near me along E. 12th Street, are home to many dozens of residents clustered together on small patches of land. Most sites lack bathrooms and running water, and now any nearby businesses that might previously have provided places to wash or use the toilet have also closed, so basic sanitation is an enormous challenge. Many food pantries and churches have closed or reduced services too.  And, as densely inhabited settlements of people living in a variety of informal architectures, these places can be potential reservoirs of infection.[1]

A field clinic for unhoused people has been set up Downtown, but service providers have also begun bringing COVID-19 testing out to the encampments to mitigate some of the challenges and risks associated with moving people. Local authorities and non-profit groups are now working to identify locations at which to at least temporarily house people who are currently living on the streets or in informal settlements.  Yet while some people are eager to move into temporary shelters where they can self-isolate, organizers have reported that others resist such situations for fear of losing pets or belongings or in some cases because the idea may trigger past traumas of incarceration or institutionalization. As I’ve heard in my own conversations with unhoused individuals, there are some who would take sleeping on the streets over living in a homeless shelter.

So these are dramatic shifts in Oakland’s public space. It seems important to ask whether any of the welcome efforts being taken to support the unhoused community during the pandemic will reshape what our society is willing to do for them when it has passed. And the same might be asked of the positive signs of pedestrian activity and public life on our quieter streets too. Once things go back to normal, will I still see all these other neighbors, many of whom I’d never seen before? I certainly hope so, because it would be nice to get to know them without awkwardly circling each other at a distance with masks on.

[1] As with so many aspects of this crisis, the data here are woefully lacking, with testing limited and results slow to be received. Our own Alameda County has yet to officially confirm a case of COVID-19 among the unhoused population, but San Francisco has announced the first case found in one of its navigation centers, and one unhoused person in Santa Clara County has died.