Alesia Montgomery presents: Race and public space: The contradictions of placemaking in Detroit and Oakland Scholars who study race and public space in US cities tend to either (1) critique the displacement of Black cultures by privatized parks and hipster shops in gentrifying enclaves or (2) celebrate street cultures (community gardens, hip-hop) in low-income neighborhoods. Neither focus adequately frames the ability of African Americans to shape public space as new movements challenge public order in the financial core of US cities. Comparing public space in gentrifying enclaves of Detroit and Oakland, Montgomery theorizes a dialectic: the history of clashes between racial capitalism and social movements in public space reappears in the contradictory design of market-driven placemaking, which suppresses and displays cultures of resistance. The legal and political legacies of Civil Rights and Black Power struggles––combined with consumer demand (Black culture sells)––force White business elites to involve Black artists in placemaking. The contradictions of placemaking shape possibilities for resistance (and co-optation), as shown in artistic subversions that use the media spotlight on gentrifying enclaves to call for social justice.

Alesia Montgomery, an urban ethnographer, is an independent researcher who works as the subject specialist for sociology, psychology, and qualitative data at Stanford Libraries. Her book, Greening the Black Urban Regime: The Culture and Commerce of Sustainability in Detroit (Wayne State University Press, 2020), tells the story of the struggle to shape green redevelopment in Detroit. Montgomery’s publications also include articles in the International Journal of Urban & Regional Research, City & Community, Ethnography, Antipode, and Global Networks.

Register in advance for this meeting:
https://us02web.zoom.us/meeting/register/tZIqdu2hqTwpGdQIwtFOoS9ZqGo3Lt1Rx5ze

After registering, you will receive a confirmation email containing information about joining the meeting. 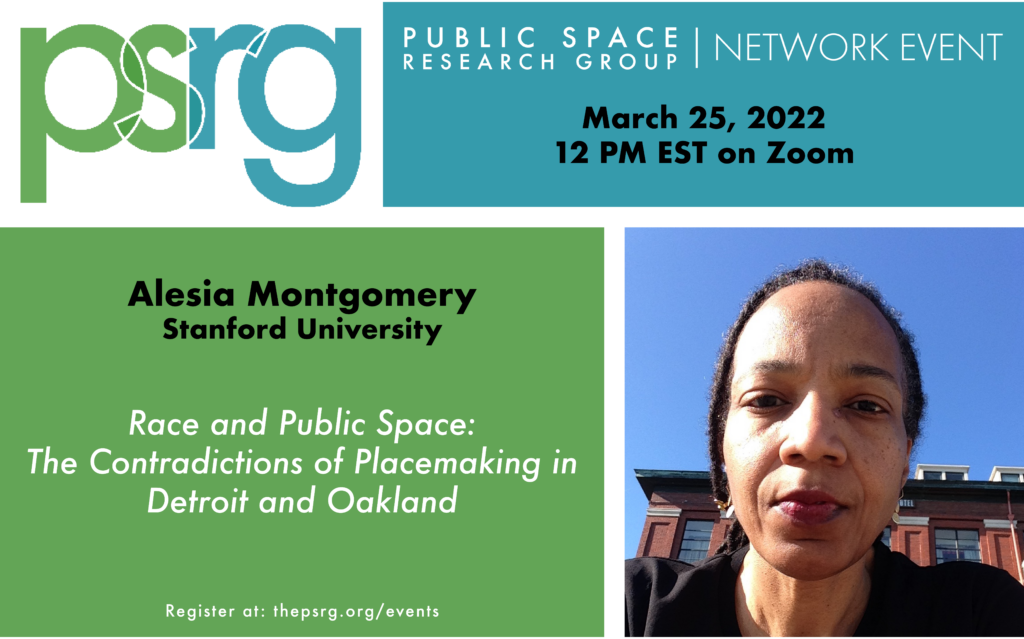